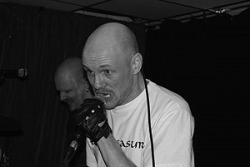 Body Pleasure is a one man EBM band from Göteborg.

The band were formed in 2007 by Erik Hasselberg. He felt that he should have his own project, where he had the power and the mandate to decide everything. The meaning and idea with the project is to make EBM with inspiration from punk, hardcore, horror and of course classic 80s electronic.

In the summer of 2008 the band appeared live for the first time at the Familientreffen IV in Sandersleben organized by Electric Tremor.
At the same time the cdr-singel Dictator were released as a DIY-release by Closet Freak Production.

In 2009 the Revolt EP were released by CFP at a gig at Klubb Bodytåget. The main idea is not to get stuck in the studio.
The focus is to perform energetic shows with punky attitude. Live the band is enforced with Johan Berg bashing drums.
The future will hold more insane performances.
Body Pleasure interviewed by Ruud for EBM-Industrial.nl.
Check it out here
http://www.facebook.com/BPSWE
http://www.lastfm.se/music/Body+Pleasure
http://soundcloud.com/bodypleasure
http://www.youtube.com/user/CFPSWE